Born in Kumbakonam, Arjun Ganesh is a versatile and renowned Mridangam artiste in the field of Carnatic music. Melody, impeccable playing for the compositions and aesthetic mathematics characterize Arjun Ganesh’s Mridangam Playing. He is the disciple of Legendary Mridanga Vidwan Poongulam Sri R. Sabesa Iyer, who developed the Thiruvarur Bani. Many of his students are becoming well known in the performance circuit. He is an A graded artiste of All India Radio and Doordarshan and has been performing for the past 3 decades.

Arjun is one of the most sought-after artists of his generation. He has been fortunate to accompany some of the senior most artists in the field such as Sri T.K. Govinda Rao, Dr M. Balamuralikrishna, Sri T.V. Gopalakrishnan, Sri T.V. Sankaranarayanan, Sri Sanjay Subrahmanyan, Smt  Aruna Sairam, Malladi Brothers, Neyveli Sri R. Santhanagopalan, Smt S. Sowmya, Smt Visaka Hari, Sri Unni Krishnan and others. He has also performed in prestigious venues in India and abroad, and regularly performs concert tours all over the world.

Arjun Ganesh is the founder of ‘LAYA-AALAYA’ Mridangam School, teaching mridangam for more than eighty students over the past fifteen years in Chennai.

He has won many Awards and Titles such as

First Prize in ‘Spirit of Youth Concert Series’ from The Music Academy Madras, 2006 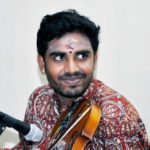 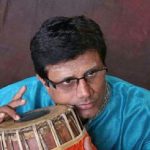